These are my works.
You can purchase them at Amazon. 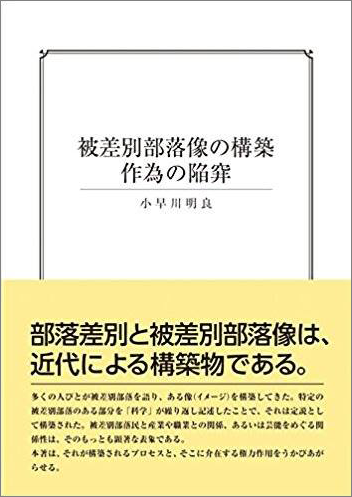 The author has been fortunate to live in a place where he could observe Burakumin for approximately fifty years. During that time, the author has been able to meet leaders of Buraku Liberation Movements, and speak with movement activists; and, of course, with movement critics. Most of the above have been knowledgeable persons of sound character. Some never took the values of the Buraku Liberation Movement, either socially or individually, and instead made efforts to be successful business persons holding to common social values. The author cannot say whether they were successful, as that judgement should be made by themselves. Without any concern for the movement and its results, some young Burakumin sought to become public servants. Many applied themselves academically; others did not. Quite simply, it has been impossible to generalize and categorize Burakumin by occupation and academic background. Of course, the quantitative research of Buraku does  testify to a tendency of low education, poverty, and poor health.

A shining light of the Buraku Liberation League, with some self-deprecation, named Burakumin “the model student in the Training School of Disruption.” The present author understood that this phrase was meant to promote alignments of Burakumin for their own organization, so often troubled with conflicts and resistance. It is notable that the phrase was not intended as cultural essentialism. The “model student” showed his and her presence everywhere. Having managed a business, this author found that the business world, also, fit the description, “the model student in the Training School of Disruption.” Frequently, in every society, human beings form ragtag crowds, constantly coming together and parting.

One yakuza boss said that yakuza organizations were vacant rooms for Burakumin and Japanese Koreans, both of whom suffer discrimination and poverty. His statement, however, is based on a myth. This author has certainly met with former yakuza members. However, it cannot be said that they were representative of Burakumin generally. Conflations of the yakuza world and the Burakumin world do occur, but such incidents do not carry much scientific evidence. One former yakuza from the Buraku that the author has interviewed had no complaint of discrimination or poverty. He was born into a very wealthy family. In his late teen years, in the prime of his life, yearning the ninkyo world, he stepped into a yakuza organization. He has no more relationship with the yakuza because he hated the strict discipline. He emphasized also that the “Yakuza world had severe Buraku discrimination.” The label, ‘former yakuza,’ became a stigma in his life history; he overcame it, however, and and continued to live positively.

It is not necessary to show such examples, to explain differences between facts in Buraku known to this author, and the image of Buraku and Burakumin that academics dowa educators portray. The same can be said of the entertainment industry. Was the Buraku the homeland of Japanese entertainment? According to rumors, many entertainers came out of Buraku. Japanese Koreans, also, would appear to go into entertainment disproportionately. Yet the author has never met an entertainer, or the family or acquaintance of such a person, who took to the entertainment business to flee the Burakumin. There was one man whom this author has met, a rock-and-roller, who had a Buraku background. But his career was not due to his birth circumstances, discrimination, or anything Buraku-related. He was merely a fellow who loved rock-and-roll music. He had talent and luck, and was scouted whilst playing in an amateur band.

Vulgar beliefs about Buraku do not go back very far in history. Most of the discourse did not exist prior to the War. It is mainly a construction of “a theory of the discriminated cultures.” The historian Kazuteru Okiura wrote papers and books connecting Buraku and entertainment, and actor Shouichi Ozawa spoke of street performances having origins in Buraku. Here was the beginning of this discourse. Additionally, the ridiculous idea of a distinct “Buraku civilization” appeared.

Until the 1970s, tight communities protected some Burakumin from discrimination and poverty. Such communities were limited. Shozo Fujita defined them in his Kyoto-Shakai local societies. If such a Buraku community culture still existed, it might be possible to study and describe them. They do not, however, exist anywhere, nowadays.

The same problem of “the discriminated culture theory” can be found in the subject of Burakumin occupations. That is the discourse that says that Burakumin continue to receive discrimination from commoners because they are engaged in so-called Buraku industries, e.g. the butchering and selling meat, the production and processing of leather, bamboo crafts and so on. How many Burakumin are employed in Buraku industries, as found in this author’s investigations? Not enough to to be statistically or quantitatively significant. Rather, the author has found a lot of non-Burakumin working in these industries. Untethered from reality, the idea of Buraku industries continues. Still, no one questioned by this author has been able to point him to an actual Burakumin industry. Rumors and books on the subject abound, however.

This is the fuzziness that an author of Buraku studies must move in and hope to emerge from. Enlightening books do exist. Burakumin studied and described include everyone from corporate employees to farmers and fishermen. The latter types tend to have additional sideline work. Some are ambitious to to develop their own businesses, and work freely and vigorously.

The term and concept of “identity” has been hot in Japan since the 1980s. Businesses use it to deal with the governance of business institutes, for example, and the sense of belonging to a company. In studies of the Buraku issue and Dowa education, “identity” is a common trope. Problem behaviors of students from Buraku are argued to be an issue of identity. Teachers and researchers designate the cause of problem behavior to be the lack of Burakumin identity and pride. This thinking tends to divide students from Buraku into two groups: good boys and girls, and bad boys and girls. Neither group, however, can be demonstrated to have a noteworthy “identity” in contrast to the the ordinary citizens’ “identity.” This identity concept may originate in arguments of Eric Ericson, and may have an important social role. But it has been made a term of convenience by vulgar interpretation. These teachers and researchers have been unable to describe anything useful by it.
Who can judge the identity of Burakumin? Who is licensed in its evaluation? Can Buraku studies do it? The Dowa Measure Council Report states that the most accepted common identifying mark of Burakumin is Japanese nationality. Is this helpful? Is the identity of Burakumin the identity of being Japanese? The only difference between Burakumin and the common Japanese is the phenomenon of discrimination from birth. But very few Burakumin are conscious of being discriminated against day and night. Does their identity blink on and off according to whether they are, or are not, currently experiencing discrimination? The ordinary Burakumin’s identity, as described to this author, is father, or mother, or manager, or employee, or the like. And every human being is a bundle of identities such as these.

Buraku studies have come to confine Buraku and Burakumin in a particular “science” world. Arguments that create an image of Burakumin by culture, occupation, and identity commit cultural essentialism. Buraku studies are hopelessly bogged down in it. The author is very interested in the harm done by cultural essentialism, and the possibility of exposing the contrast between the created image of Burakumin, and actual Burakumin’s diverse lives.

In the first section, the author discusses social dynamics and wheels of Burakumin, which appeared as a policy of social exclusion to Japanizing Burakumin. How did discriminated-against Burakumin physicalize imperialistic antiforeignism and racism, and how were they tightly integrated in the nation state as second-class nationals?  Including the Reconciliation Movements, the subject of the mental constitution of Burakumin was the “self-consciousness” as Burakumin. That “self-consciousness” connected to a national consciousness or awareness as subjects of the emperor, and motivated Burakumin themselves to be fine and free labor force. Established Buraku studies fail to analyze this process of constituting consciousness. On the problem of consciousness, the first section reveals a function of Buraku as an apparatus for awaking Burakumin to be members as Japanese nationals; the process of educating Burakumin as a fine labor force; the contrivances of state power that incorporated Burakumin into the national order, to given Burakumin jobs. The author takes the point of view that Buraku was a vertex of two powers: from above, the power of the nation state; and from below, the power of “self-consciousness” in the Buraku.

In the second section, the author reveals how Buraku studies constructed the Images of Burakumin among the Japanese, including among Burakumin. Here, concretely, positive analysis criticizes the “Buraku industry theory” and the “Buraku culture theory”.  On the critics of the “Buraku industry theory,” it is demonstrated how the slaughter industry, the leather industry, and the bamboo crafts industry became Burakumin-specific industries and occupations. Additionally, while images were being constructed, what roles were played by the nation state and Buraku studies is discussed. The author criticizes the “Buraku culture theory,” using a method of the sociology of music. This criticism is based on an analysis of the formation of music and drama said to be specific to a Buraku culture. In his research, the author shows the process by which common Japanese arts are designated as specific Buraku culture. A critique of the “scientific nature” of Buraku studies is included.

In the third section, the author analyzes small Buraku, the typical configuration of Buraku, with categorized Buraku having several houses held together. These are dotted throughout the country. After the Second World War, the state of Buraku studies was very inferior to that of sociology in general. The author reveals causes of this, and argues Buraku studies resulted in a confinement of the Buraku issue, and a confinement of Burakumin in shabby “scientific” images. The author reveals that this phenomenon in real Buraku occurred in a confluence of social inclusion and exclusion. Additionally, through tracing life stories of “Burakumin who did not conflict with discrimination,” the author proposes diverse images of Burakumin, and criticizes the discourse of arguments concerning Burakumin identity. Indeed, such “identity” does not exist.

Throughout, the author writes in critique of the scientific, reclusive character which Buraku studies continue to maintain. As mentioned, working as a corporate manager while studying the Buraku issue, the author finally mustered up enough courage to retire early and devote himself entirely to research. Much in this book is owed to arguments tested in the Institute of Social Theory and Dynamics, headed by Dr. Hideo Aoki. Assistance was also given by a Grant-Aid for Scientific Research. The author expresses his heartfelt to these. 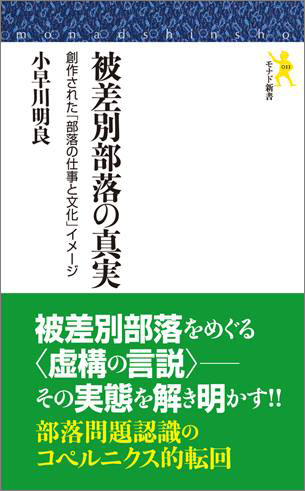 The Truth of Buraku, Constructed Imagery about Occupations and Cultures in Buraku, Tokyo: Ningen Publishing, 2018.

This introductory text on the Buraku issue demolishes the commonly held myths, replacing these with understanding derived from empirical field study and dialogue. Buraku discrimination affects 2,000,000 Burakumin in 6,000 Buraku districts throughout Japan. It is not a residue of Edo feudalism; it is not based on views of religious kegare (impurity or pollution); it is not an archaism that is bound to disappear before advancing modernization. Burakumin discrimination and exclusion is not a product of the old-time Japanese.

Sensational books that splash the Buraku-backgrounds of popular personalities are always bestsellers. Recently, data on Burakumin is bought and sold as a practical commodity. In a shadowy underworld, Buraku surveys, including background checks of commoners into criminal records, history of mental illness, etc., comprise a large industry.

What are the Buraku? Who are the Burakumin? This book critiques the vulgar discourses stating that Buraku are essentially related to: butchering; leather production; blood; and kegare. Readers will receive a 180-degree shift in their understanding of Buraku history and the Buraku issue.